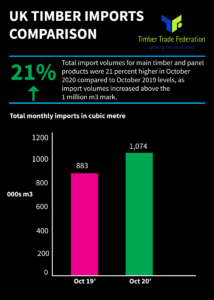 Timber and panel import volumes performed strongly in October 2020 for the fifth consecutive month since June, according to the latest timber statistics for October 2020.

However, even this strong performance cannot compensate for the loss of import volume in Q2 meaning the ten months to October 2020 is still 11 percent below, compared to the same time last year. Solid wood imports were 8 percent below the same period in 2019 and panel product imports were 15 percent lower.

The main drivers of growth in the early Autumn were OSB and softwood imports, supported by higher volumes of plywood and MDF compared to the same period in 2019.

Collectively, these four products have led to a 15 percent (377,000m3) increase in the latest three months (August-October 2020) for which data is available.

Softwood import volume topped over 700,000m3 in October 2020, the highest October volume since 2003. The main contributors were Sweden and Latvia with Germany and Russia also exporting more to the UK in the month compared to October 2019.
OSB imports in October 2020 were 54,000m3, the highest in the ten months to October, and a 68 percent increase from the volumes seen in October 2019 (32,000m3).

“This year has seen demand increase considerably across all products, while supply chains have been severely disrupted as a result of the COVID pandemic, so it is good to see imports rebound so strongly. From talking to our members, we expect the statistics for the last two months of 2020 to continue to show this trend and end the year only slightly below 2019 imports, which would be a remarkable achievement given the circumstances.”

“However, despite this comeback in supply, we must reiterate that the supply situation remains tight with suppliers keeping most customers on allocation until further notice. These statistics are a positive sign, but we have some way to go before balancing the market demand.”